In comparison to the visionary Industry 4.0 technology, the machine tool industry can appear rather down-to-earth. But even in a long-established technology such as gear grinding, substantial improvements in terms of speed and quality have been made. Here, the Engineering Technology Group (ETG) highlights the generating grinding machines and evolution from Kapp Niles – the industry leader in gear production. 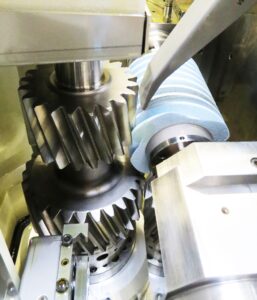 Cutting speeds for generating grinding between 63 and 80m per second yield huge productivity gains. This is accomplished with common tools such as grinding worms with a typical diameter of 300mm and with 5,000 to 7,500rpm. The large tool diameter presents a problem with interference contours because the tool requires room to finish its path on both ends of each grinding stroke. Typical examples are a bearing seat with a hob breakout, or a larger secondary gear close to the gear to be processed.

Profile grinding of such workpieces would be very time-intensive. The generating grinding technology is a viable alternative but requires a smaller grinding worm. However, smaller grinding worms require a higher RPM to reach the same cutting speed as that of a larger tool. Traditional gear grinding machines do not measure up to the task of meeting the dynamic requirements of tool and workpiece drives.

The new developments from Kapp Niles such as the KX160 TWIN and KX260 TWIN, now offer new alternatives with dressing and grinding tools and machines specifically synchronised to handle such complex tasks. Dr Sergiy Grinko, Project Manager at Kapp Niles, explains: “Thanks to high speed grinding spindles it is now possible to generate grind gears that require a tool diameter as small as 55mm. In conjunction with the maximum possible width of 180mm for the grinding worm, it is now possible to reach previously unattainable cycle times for critical gears with interference contours as well as cut production costs.”

The tool drives of the Kapp Niles KX 160 TWIN and KX 260 TWIN machines can run at speeds up to 25,000rpm. This necessitates the workpiece rotating at a faster speed as well. Kapp Niles has a head start here as even its standard machines offer a workpiece drive with 5,000rpm. Dr Grinko calculated the cycle time for one workpiece for one customer and the conclusion was non-dressable profile grinding with a CBN wheel results in a cycle time of 5.4 minutes. In contrast, dressable generating grinding of the same workpiece resulted in a cycle time of 2.9 minutes with dressing intervals every 25 workpieces.

Gear finishing can considerably improve the characteristics of a workpiece. For example, with a better surface finish on the tooth flanks, it is possible to use transmission oils with lower viscosity. Consequently, the transmission improves efficiency without the risk of reduced stability. This requires an 80-90% bearing ratio over the contact load area, which during the finish grinding process is obtained by mechanically removing the roughness peaks of the surface. 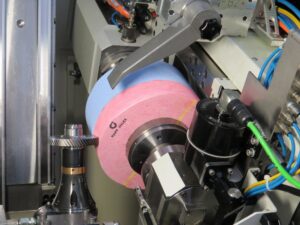 a combined tool with conventional- and superfinishing part

The required surface finish has traditionally been attained via time-consuming processes, such as isotropic superfinishing (ISF). This process entails submerging the workpieces with small non-abrasive pellets into a vibration tub filled with a watery solution and an additive. While this offers very good results, it could very well require several hours to complete.

Compare that to a cycle time of one minute per gear that series manufacturers operate with. Dr. Grinko points out: “Series transmission manufacturers require automated process chains, ideally with a single-piece-flow. Variable processing times are therefore not practical. ISF requires chemical additives that are subject to several regulations and safety measures, as well as recycling and disposal, all of which are a burden for the manufacturer to comply with. It is, therefore, more sensible to equip existing grinding machines with superfinishing capabilities to meet production requirements.”

With these special tools, the newer generating gear grinders of the KX and ZX series can reach a surface finish of Rz 0.5 – 1μm in one clamping setup With cutting speeds of up to 63m per second the cycle time is higher but generally less than 50% higher than the cycle time of conventional finish grinding.

Dr Grinko describes the development at Kapp Niles: “Generating grinding is substantially more efficient than profile grinding with a finishing wheel. Our expertise allows us to make informed decisions concerning the most effective segmentation of the grinding zones on the combination grinding tool. Our software complements the set-up for optimal results.”

Gears are rarely manufactured without lead modifications. A simple involute exists in textbooks, but not in reality. In the real world, engineers have to deal with tolerances such as axes misalignment in the gearbox. To address this issue, the tooth flank is designed to have a crown of several microns. If a gear had no lead modification, the slightest deviation would result in a negative impact on load and noise behaviour. 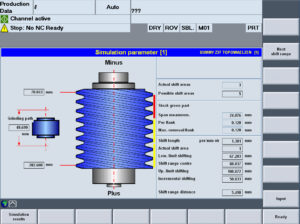 input screen with display of the possible shift areas

Processing such gears with generating grinding technology imposes special demands on the machine: the distance between the tool axis and workpiece axis will have to be modified repeatedly throughout the process. This creates a bias error due to the position of the contact lines and the axes, which means instead of an asymmetrical crown there could be a lead distortion. Dr Grinko explains: “Generally, it is not the goal to simply eliminate bias but rather to manipulate it. If the customer knows what the load will be and how the load will affect the behaviour of the workpiece, it is possible to calculate the best generating contact for that application. Sometimes the noise behaviour is better with minimal bias than having no bias at all.”

So, such complex gears can be produced by generating grinding. This requires that during the grinding process, the tool shift position be interpolated with the axial feed position. Additionally, the process requires a modified tool and the grinding worm needs to have segments with different geometries specific to the requirements. Standard dressing tools can generate such varying geometries during the dressing cycle. Such complex calculations of the worm geometry, the grinding and dressing process require highly sophisticated software. Some manufacturers do such calculations in-house and upload the data to the machines. However, this takes too much time.

Kapp Niles pursues a different approach. Dr Grinko illustrates: “We have a user-friendly interface for topological generating grinding where calculations for geometry, dressing and grinding paths can be done in the machine control. Our customers can manipulate the lead modifications to their requirements from simulation to final setup in 2D and 3D.”

After the data is entered, the machine calculates the maximum possible number of shift areas for the specific worm width at hand.

Dr Grinko explains further: “For the topological generating grinding process, the goal is to have as many segments on the worm as possible for highest utilisation of the grinding tool. The segments have to be large enough to generate the desired geometry.” Once the number of segments is determined, the machine operator can monitor them in the simulation screen. 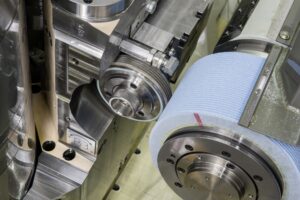 One primary advantage of generating grinding is time savings. A higher number of threads on the tool allows for an increase in feed rate and subsequently a reduction of processing time. The next natural step is to reduce the dressing time. This is accomplished by dressing multiple threads with one tool simultaneously. Kapp Niles investigated this process in detail to explore all possibilities for improvement. The process begins with the dressing tool, as Dr Sergiy Grinko explains: “Multi-rib dressing requires full-profile dressing rolls, which means they do not require a separate tip dresser. Multi-rib dressing tools are manufactured using a negative-plating process. This process does not place the diamond grains directly onto the steel body but rather into a negative form which then goes through the nickel-plating process. The negative form with diamond grains is then moulded to the steel body.”

To keep the dressing time to a minimum, it is necessary to coordinate the number of ribs on the dressing roll and the number of threads on the worm. The best scenario would be to have the same number of ribs and threads – that would result in all threads being dressed during each infeed pass. However, this is not always possible. A combination of five threads on the worm and three ribs on the dressing roll would lead to the latter wearing more quickly. To avoid this and to increase the tool life of the dresser, Kapp Niles machines utilise an algorithm that guarantees uniform wear.

The examples prove that significant progress in productivity and quality is still possible even for a well-established technology such as generating grinding. Beyond faster drives, new tool concepts and intelligent controls, additional advancements allow for further improvements such as fully automated clamping change and integrated automation solutions as offered by the new pick-up generating grinding machine. All these factors allow for cycle times and process qualities that were inconceivable only a few years ago.