Following the successful launch of the Permanent Trade Show at its Southam headquarters in June, the Engineering Technology Group (ETG) reports significant success in its follow up activities and the sale of over half of the machines exhibited in the Show area.

After polling his sales team, ETG UK sales manager Stewart Cousins reports that some 30% of sales in what has been a very positive sales environment this past

Summer can be attributed to the Trade Show opening and subsequent customer visits and demonstrations.

“The machines we had installed in the demonstration area have made a good impression,” explains Stewart “and of the 12 selected for demonstrations at the opening event, half have now been sold and alternatives are in the process of being installed.

“The thinking behind the PTS – as its name implies – was for a year around demonstration facility rather than just a pop-up trade show for two or three days.

“This means that customers can use the facility to prove out programmes and concepts before deciding what the best machine tool for the task in hand is,” he explains.

The PTS features machines from Chiron, Nakamura-Tome, Hardinge, Bridgeport and Quaser as well as examples of workholding and fixturing from ETG specialist Hyfore.

Another important development has been the seconding of third year apprentice applications engineer Chloe Reeve to work in the facility as its programmer and demonstrations co-ordinator.

“This is a unique 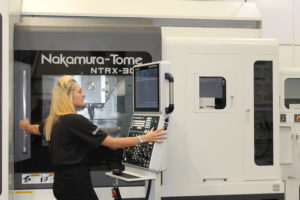 opportunity for Chloe to get hands on experience with the machines as well as working alongside the programming experts, representatives of the tooling supplies and the raw materials people,” explains Stewart Cousins.

Chloe (20) is working towards qualifying as a applications specialist and as well as College studies has been working alongside the ETG applications engineering, turnkey and training teams at ETG’s Wellesbourne based Operations Division.

“It’s a great environment to work in and one that gives me an opportunity to work not just with our engineers but those of customers and specialist suppliers,” explains Chloe.  “I aim to put this experience to great use as my career in engineering progresses,” she says.