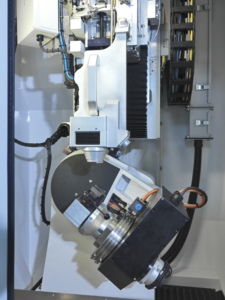 The work envelope of the Winbrow hsa5 iii machine

The Engineering Technology Group (ETG) is pleased to introduce the HSA5-III Laser Ablation system from the Winbro Technologies Group.

Winbro has installed over one hundred of their HSA5-III machines at many of the world’s most advanced aerospace and land-based gas turbine manufacturers.

The HSA5-III incorporates the latest design, control and process concepts to take productivity and performance to an entirely new level. The machine includes features specifically developed for intricate laser processing of precision forms and features in components such as blades, vanes and segments in aero and industrial gas turbines.

The HSA5-III is built upon a robust fabricated steel base which is welded, stress relieved and machined. The fabricated column, mounted to the rear of the base, carries the Z-axis and this is where the integrated laser scanning head is mounted. The X and Y axes assembly is mounted on machined pads at the front of the base whilst the A and B-axis rotary/tilt table is mounted directly to the X and Y table that is driven by torque motors. The spacious work envelope of 200 by 200 by 250mm in the X, Y and Z axes is complemented by a continuous A-axis and a B-axis of -135° to +100°. 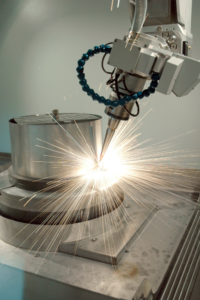 The Winbro Laser Ablation process has a 1070nm wavelength Laser that combines vaporisation and melt erosion of material from the surface. The HSA5-III machine uses a fiber laser that delivers anything from 50-300Watts of average power, pulsing through a Q-switch for high speed, short pulse width waveform. A Galvo-Scanning head is used to move the beam on a pre-programmed tool path.

The Winbro HSA5-III Laser Ablation machine is perfect for localised removal of TBC, reopening of blocked cooling holes and the processing of 2D and 3D diffuser shapes in coated or uncoated components. To ensure ease of use, Winbro has installed a Windows-based operating system and the advanced Winbro TCPro and TCPose l software that enables the end-user to work with all common file formats such as IGES, STEP, NX, STL, CATIA and ProE.

The machine incorporates patented part probing that gives the end-user confidence that they can produce components to the tight dimensional parameters specified for this machine. The machine achieves 0.010mm precision level in the X, Y and Z axis with repeatability of 0.008mm which is complemented by an A and B-axis accuracy of 0.0055° and repeatability of 0.004°.