Not Just Any Old Bin!

Tucked away in a dark corner, usually hidden behind the gloss and glamour of the technical wizardry of the high specification machine tool, the life of the humble swarf bin can be a lonely, largely forgotten existence.

In what could be described as ‘a full makeover’ Engineering Technology Group’s team of designers have given the traditional swarf bin an overhaul to include larger replaceable wheels, a two piece construction (sub frame and hopper) and a new powder coated paint finish that can colour match the machine tool livery.

The replaceable bolt on wheels overcome a weak point on traditional designs which, once they seize or snap, require welding work for replacement. In the event of maintenance being necessary the hopper also detaches from the sub frame. 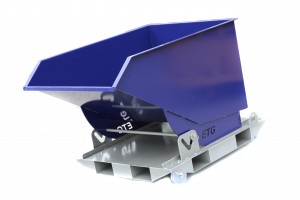 The ETG design is fabricated from 4mm steel with reinforced top bars.  It is shot blasted and primed prior to colour match powder coat painting which in itself extends the units working life.

It is hoped that all customers ordering a new machine will in future add an ETG hopper but they are available for general sale.