Set up in 2012 to deliver precision tooling to companies in the north of England, Go Tools Ltd is a specialist manufacturer of precision diecast dies and injection mould tools for a multitude of industry sectors. With an unwavering commitment to quality and service, the company has invested in high-end machine tools from the Engineering Technology Group (ETG).

The ops Ingersoll Mitsubishi machines all supplied by Wellesbourne-based ETG

With a range of machine tools from multiple vendors on the production shop floor, the Rotherham-based company found that some of its machines were ageing, lacking the desired precision, repeatability and reliability levels. This created bottlenecks and increased the reliance on the expertise of its shop floor team to ensure components and mould tools were conforming to the company’s stringent quality requirements.

One point of concern was an ageing EDM machine, recalling this, Go Tools Technical Director Mr Steve Barrowcliff recalls: “Our old EDM machine had inconsistent cut quality and poor precision levels that made us rely on the expertise of our staff to retain tolerance and surface finish requirements. As an old machine, it was also unreliable and a potential concern due to the amount of EDM work going through the shop floor. We investigated the market and the Mitsubishi MV1200R wire EDM was the perfect fit for our business. The programming platform of the Mitsubishi EDM was 10 times better, as was the accuracy and the speed of cutting. Simultaneously, we needed a spark erosion EDM, so we also invested in the OPS Ingersoll Gantry Eagle 400 – both machines were the result of the technical expertise and support from Scott Elsmere of ETG.”

This first delve into Mitsubishi EDM technology proved a resounding success with productivity, reliability and quality improving significantly. So, when the company found its Mitsubishi MV1200R EDM at capacity some years later – the company naturally went out and bought another machine that was the same as the first. “We bought our first Mitsubishi EDM machine eight years ago and its performance and reliability during that period have been exemplary. With the machine running 12-14 hours a day, 5 days a week, we recognised that we needed another machine. This was to support our increasing workload with other members of the Gripple Group of companies, of which Go Tools is a part. The addition would also assist our growth in the medical device industry,” adds Steve.

As Steve continues: “We were struggling to keep up with demand and our existing Mitsubishi MV1200R was at capacity. Our first Mitsubishi MV1200R improved our cycle times by more than 50% and the precision levels and surface finishes were impeccable, so when it came to buying a second machine, we didn’t need to look anywhere else. Initially, it was the expertise of Scott Elsmere and his understanding of our company requirements that edged us towards the Mitsubishi machine. Over the 8 years of having a Mitsubishi EDM, Scott continually provided exceptional service and support to our business – this was another major factor in Go Tools investing in a second Mitsubishi machine.” 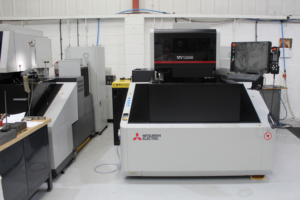 The immaculate mv1200r at go tools

The Mitsubishi MV1200R is equipped with linear shaft motors and next-generation drive technology that incorporates Mitsubishi’s optical drive system (ODS) that enables the machine to achieve a circular accuracy within 1µm. Additionally, the machine is equipped with automated wire threading. Thanks to a new annealing system, wire threading is greatly improved with a curl ratio of less than 10%. From a productivity perspective, surface finish improvements are realised through enhanced power supply performance for high-speed machining, and this reduces cycle times by machining 50% faster with only two cuts.

From an operational perspective, the staff on the shop floor at Go Tools found the first Mitsubishi MV1200R a major improvement from its predecessor. However, the latest generation machine that arrived more recently takes simplicity to a new level. With a large 19-inch display screen, users can easily navigate the user-friendly system that enables all functions to be viewed or used with one touch from the ‘home’ screen. This feature reduces the number of operations performed to go from the navigation menu to machining by almost 40% compared to previous versions.

Concluding on the relationship with ETG, Steve Barrowcliff says: “The technical expertise of Scott Elsmere was a major factor in Go Tools purchasing its first Mitsubishi EDM machine. Of course, this expertise had to be backed by a high-quality EDM machine with industry-leading technology – and Mitsubishi certainly delivers that. The performance, precision, repeatability and the ease-of-use, made the first Mitsubishi machine a hit with our guys on the shop floor. However, it was the reliability, longevity, impressive machine uptime and exceptional service and support from Scott at ETG that ensured that when we needed another EDM machine, ETG was going to be our ‘only’ port of call.”