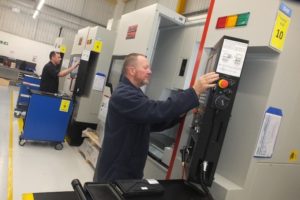 Bowmill’s new high volume plant is situated in Tewkesbury, Gloucestershire, close to four of its major landing gear customers based in nearby Gloucester and itself in the centre of a growing manufacturing conurbation.

At its main factory in Poole, Dorset where it operates a dedicated KANBAN facility for Airbus landing gear kit production, Bowmill has been manufacturing A320 and A330 landing gear kits since 2002 as well as complex components and assemblies for other OEM’s.  Operating in a competitive, cost-down environment necessitates they “stay ahead of the game” in the words of managing director Nick Epps and to that end, machine tool investment is both extensive and ongoing. 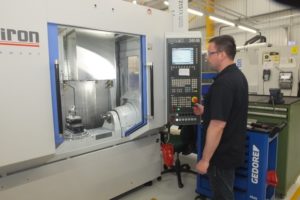 The Chiron FZ15FX has a basket tool changer.

The FZ15FX has enormous ability and high speed machining capacity and is claimed by Chiron to be among the best machining centres of its class in terms of speed, compact construction, stability and reliability. The heart of its technology is the CHIRON basket tool changer which offers high positioning accuracy, since the travelling column does not need to change its X – Y position during a tool change.
This machining centre was installed following an objective review of Bowmill’s manufacturing capabilities in which the advantages of progressing from multi-operation methods using a low cost machine base to an advanced technological manufacturing system were thoroughly assessed. 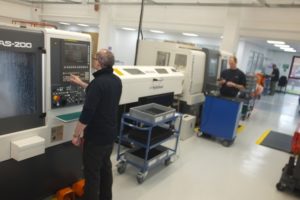 A consequence of its installation has seen Bowmill able to adopt the ‘slave link’ machining technique whereby billet materials used for creating larger components such as brackets have cavities machined out as solids as opposed to milling out with consequent scrap. With slave link, the ‘scrap’ billet is used to manufacture another smaller component (or components) considerably reducing raw material waste.

As a consequence, the Chiron was installed and has reduced machining times by 21%, defects by 7% and reduced raw material usage by 28%.

After 18 months successful operation the decision was then taken to automate the process with the addition of an FZ12 Flexcell Uno automated manufacturing/robotic system. This enabled a further 12 of the A320 prismatic kit components to be moved to the machine with lights out operations. 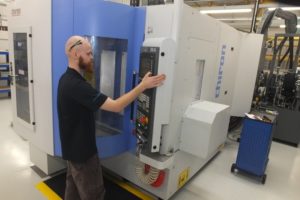 This Chiron FZ15 cell is fully automated with a FlexCell Uno system.

In addition to the Chiron many of the smaller kit components manufactured in Poole – there are over 220 different items in some kits – are largely handled by ETG supplied Nakamura Tome mill/turn machines of which Bowmill has six.  These include three AS 200 machines (3 bar fed and with with a sub spindle) and a heavy duty SC 300L with block slideways to increase rigidity.  Completing the inventory of machines there are 2 Quaser MV154 3-axis VMC’s equipped with Nikken rotary tables to give the 4 axis capability required.

Now, to accommodate new contracts in Tewksbury, Bowmill has developed a new manufacturing unit which is largely a mirror image of its Poole facility.

Mindful of productivity and the cost-down operating environment needed to maintain customer expectations, Bowmill’s investment in the Chiron FZ12 provides considerable streamlined loading, unloading and pallet stacking capabilities. The twelve A320 prismatic products will ultimately be manufactured on the automated machine with all the fixturing and workholding for the turnkey developed and manufactured by sister ETG group company Hyfore workholding in Coventry. 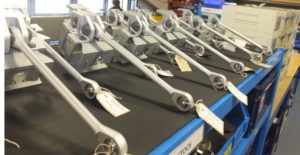 “There has been a considerable increase in the build rates required of the kits due to the on-going success of the A320/A321 neo and an upsurge in A330 popularity,” explains Nick Epps.

“Unusually for the aerospace sector, Bowmill is the single source global supplier of A320 kits but contract obligations necessitate we operate from two distinct manufacturing centres – hence the new Tewkesbury plant investment.  Being close to our Tier 1 customers (Safran Landing Systems and Triumph Actuation Systems U.K. Ltd) has been logistically important for KANBAN operations as is a supply of highly skilled personnel who will integrate into our business and be multi-disciplined in order to meet of our expectations.

”Customer demands in this sector are exceptional in terms of quality, delivery, support and cost.  We are expected to deliver ‘cost-down’s’ and these can predominantly be achieved by more efficient and advanced manufacturing,” he adds.

Phase one of the new investment will see the Tewkesbury plant concentrate on A320 kits but Phase 2 – accommodating components for other OEM’s – will come on-line later in 2017. 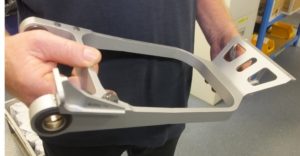 Material from the void in this bracket is cut out as solid using ‘slave link’ technology and used to manufacture another smaller component.

The Bowmill project management team in Poole will embrace the Tewkesbury operation which will also undertake on site de-burring, inspection, precision grinding and assembly making it totally integrated with process and logistical controls across the multi-site organisation.

Bowmill has been producing landing gear kits for the Airbus family of aircraft since 2002.  The kits comprise a number of variants including the Airbus A320 (A321) and new A320 neo single aisle planes, the others for the A330.  All kits are produced in left and right side versions and in standard and heavy duty versions. The A320 kit has 82 items whereas the A330 has 221 with each kit sub-assembled, tested and delivered direct to assembly line.  The kits include class 1 (critical part) to class 3 components. 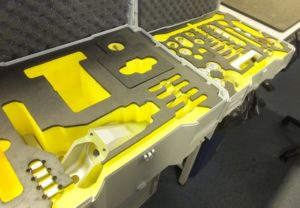 Bowmill consistently achieves and exceeds quality and kit call off requirements at a rate no lower than 98% on KANBAN logistical control deliveries.  Kits are not just manufactured by Bowmill but quality checked and assembled into bespoke interlocking kit containers for delivery to the customer in the UK and Europe.  As a consequence the machining lines have to offer very high levels of performance, reliability and flexibility and hence, Bowmill’s policy of self-sufficiency.