Transmissions for electric cars are much simpler in design than conventional combustion engines. However, they place far higher demands on the manufacturing precision of the gears used. Thanks to completely new procedures for quality assurance directly in the final gear grinding process, these specifications can be met in series production with technology from Kapp Niles that is available in the UK from the Engineering Technology Group (ETG). 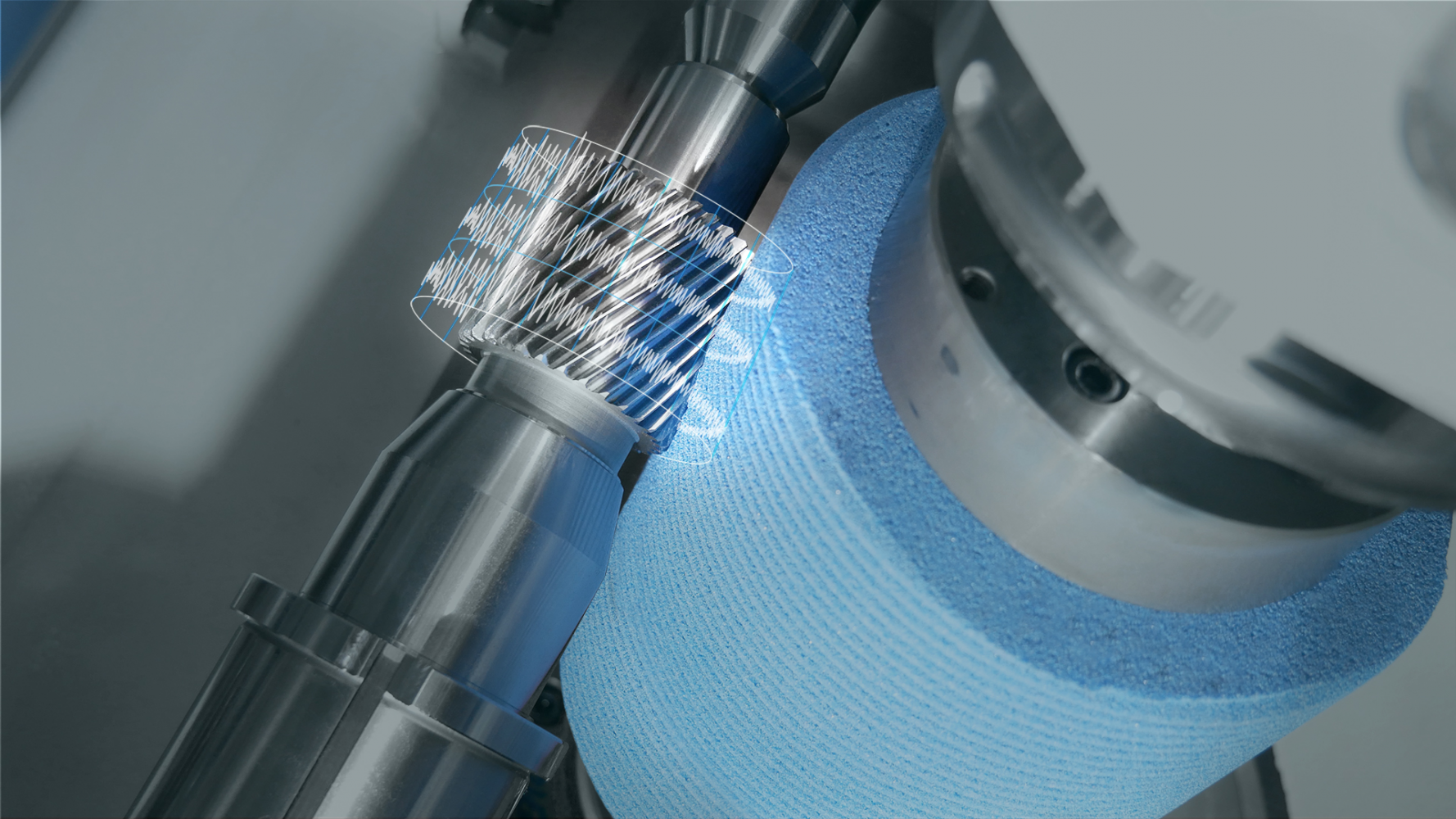 Generating grinding of an e-transmission gears

All-electric vehicle drive units usually use a two-stage non-shiftable transmission. You would have thought that this would simplify production. But in reality, it’s not that simple. First of all, engine speeds are much higher for the e-drive than combustion engines, at up to 16,000rpm. This means electric motors deliver an almost constant torque over a wide speed range. It is applied to the transmission right from zero speed, unlike combustion engines. Furthermore, an additional constraint makes production much more demanding than with the conventional drive train. As Friedrich Wölfel, head of machine sales at Kapp Niles, describes: “The noise from a combustion engine masks the transmission noise, meaning it is not noticed in the first place. On the other hand, an electric motor is almost silent. Above 80km/h, rolling noise and wind noise are the predominant sounds, irrespective of the drivetrain. But below that speed, transmission noise can be irritating in electric vehicles. We also have to take that into account when manufacturing gears.”

The almost constant torque level and high speeds require a different gearing design, which in turn can affect the noise dynamics. Here, in particular, demands are higher than with combustion engines. However, when it comes to the pressure to generate maximum efficiency, there is no difference at all between gears for e-vehicles and conventional drives. The challenge for Kapp Niles, as a specialist in the hard fine machining of gears, is to implement a generating grinding process that is both productive and optimised in terms of noise dynamics.

Hot on the heels of transmission noises

Achim Stegner, Head of Predevelopment at Kapp Niles, describes the basics: “Depending on the modifications of the gearing defined at the design stage, such as line corrections, width convexity, head retraction, as well as the profile and line interlocks typical of the process, characteristic noises occur in the transmission during meshing, which can be assigned to specific tooth meshing frequencies. The entire transmission, in turn, also exhibits characteristic properties concerning structure-borne noise and radiation, depending on the constructive design. This is stimulated in the tooth meshing frequency and its multiples. Manufacturers try to minimise this effect as much as possible by adapting the design of transmission and gears.”

For the time being, these considerations only apply to ‘perfect‘ gearing. But of course, like any other mechanical component, gears also generate variances from the ideal target geometry in series production. These have different causes and effects, as Achim Stegner explains: “In addition to the stimulation caused by the tooth mesh, there are other disturbance variables that can result in noises in the tooth mesh. These make themselves feel like ‘ghost frequencies’. These are frequencies that do not coincide with the tooth meshing frequencies and their multiples, and can just be introduced into the component during grinding.” Ghost frequencies are caused by minimal irregularities that are almost impossible to completely avoid in series production. It becomes particularly critical when these variances map almost exactly onto the circumference of the gear, as this results in harmonic stimulation.

The cause of such malfunctions can be found in the axis drives of the machine tool used. Electric motors have certain pendulum moments. Measuring systems work with discrete line counts and finite eccentricity errors from the assembly. Last but not least, balance conditions and spindle bearings can contribute to possible irregularities. Waviness as small as 0.1mm can cause noise in gears. Achim Stegner explains some more causes: “Every machine has natural vibrations. For example, the typical natural frequency of a workpiece spindle is about 250Hz. This can also be reproduced exactly on the workpiece if the speed constellation in the generating grinding process is unfavourable. We can eliminate such effects by the clever choice of a suitable speed window during machining.”

Once the optimisation potential on the machine side has been exhausted, there are also several technological options for improving component quality in terms of noise dynamics. This includes the selection of the number of gears of the grinding worm, the speed ratio during dressing and grinding, the finishing speed and the feed rate.

Not all errors are the same

Roughly speaking, there are two typical types of error patterns in serial gear grinding. On the one hand, trends are emerging that show a continuous change in characteristics. On the other hand, there are individually conspicuous components. Trends are usually easier to control. They can be caused by the gradual wear of a grinding worm. If permissible manufacturing tolerances are exceeded here, it is usually sufficient to shorten the cycle between two dressing processes. 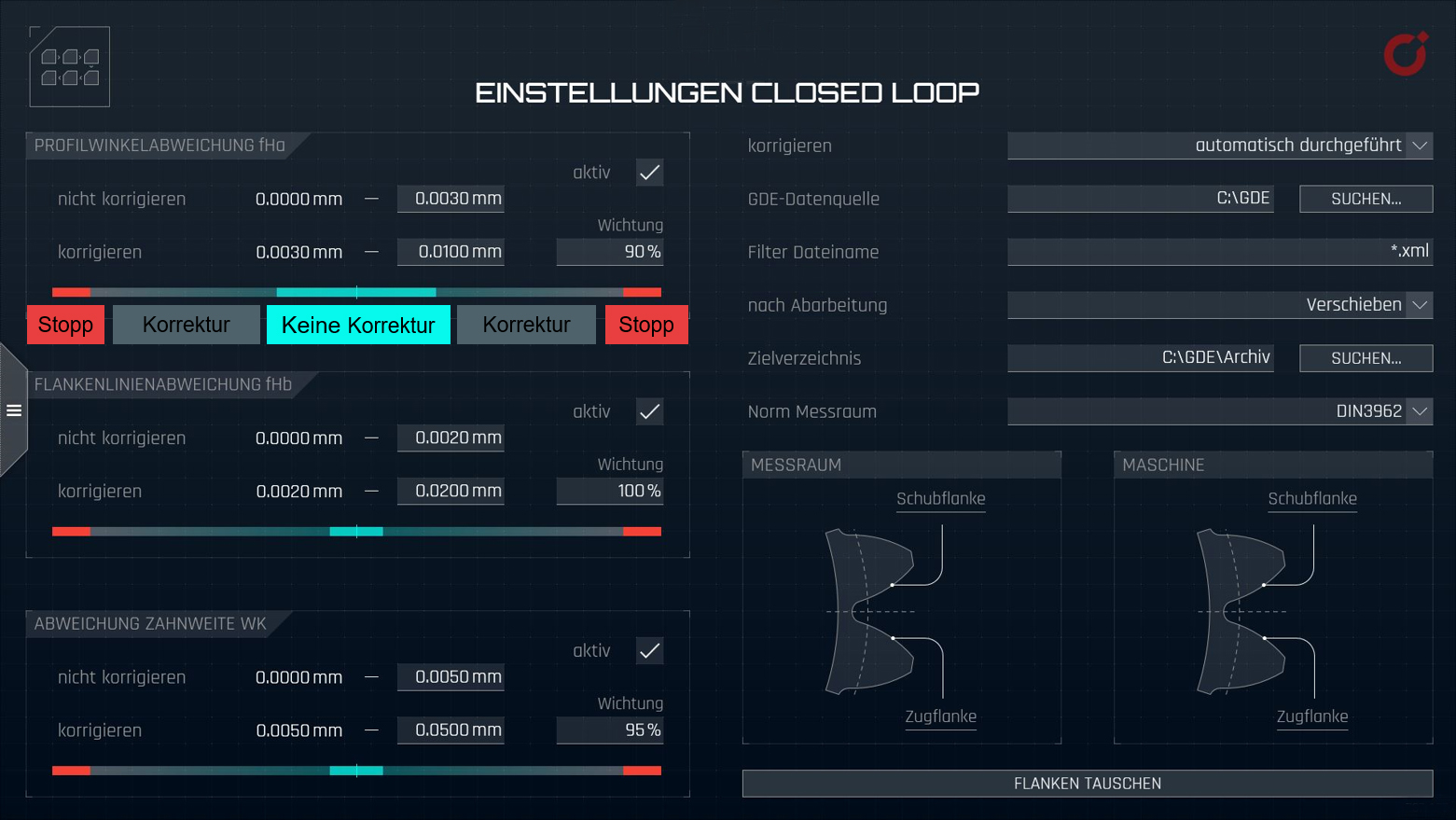 Since the actual machining of gear takes much less time than the control measurement in highly efficient manufacturing processes such as generating grinding, it is also not possible to inspect every single component. In addition, quality demands for gears for e-transmissions are extremely high. “The required tolerances of profile angle, flank line angle, concentricity, two-ball dimension are in some cases smaller than in the conventional drive train by a factor of 3. For the flank line angle error fHß, a typical requirement is ±4mm; with combustion engine transmissions, this was sometimes ±13mm,” says Friedrich Wölfel, describing the requirements of his customers. Together with the required machine and process capabilities, these quality requirements are testing the limits of what is technically and economically feasible. And the static and dynamic stability of the processing machine and process cannot be increased at will. The only way out is to start with the methods of analysis and control.

Concerning the approach to trend-related deviations from the target geometry, in particular, the ‘closed loop’ has already established itself as an important tool. This accelerates and improves the feedback between downstream gear measurement and the processing machine itself. Here, the inspection results are transmitted directly to the processing machine as a standardised file. The grinding machine then uses pre selectable tolerance corridors to decide independently whether it needs to intervene in the process at all, for example with scalable correction values. If unexpectedly high variances from the target geometry occur, the decision on how to proceed is then up to the operator (Fig. 1).

The referee at the end of the manufacturing process

At the end of the process is an ‘end-of-line test bench’. It is no longer individual gears that are tested, but fully assembled transmissions. They go through various test cycles that simulate operating conditions in an actual vehicle. The operating noise is also recorded. Acousticians can analyse this data to extract intervention ratios, typical frequencies and possible interfering noises.

Today, it is possible to identify components that could cause noise before they are installed in the transmission. A very common procedure for e-drives is waviness analysis on gear surfaces. Here, profile, line and pitch measurements are carried out on all teeth on the gear measuring machine and lined up in such a way that the gear is mapped over its complete circumference. The waviness on the gear wheel can be mathematically measured. However, starting with the complete measurement of the gears, this procedure is very time-consuming and thus unsuitable for testing every single piece in series production. Friedrich Wölfel on this: “The grinding time of typical e-transmission components is less than one minute, whereas the measuring time is four to six minutes. In the case of an all-tooth measurement as the basis of a waviness analysis, it can be significantly more, and downstream component testing does not add value either. What is needed here is further development of in-process analysis, which allows conclusions to be drawn about the component quality produced during machining.”

A promising approach is to detect possible defects as early as the grinding process. Achim Stegner explains: “We already have numerous sensors and measuring systems in the machine that can provide us with many indications, measured values and information. We primarily use it to operate the functions of the machine, but we also want to use it to assess the machining process.”

However, this does not mean integrating an additional tactile measuring function into the grinding machine. Nor is it a question of inspecting a ground component directly in the machine, evaluating it and correcting any discrepancies during production. The focus is rather on analysing the machining process in real-time to detect deviations from a previously defined reference process.

This can be explained using the ‘power consumption of the grinding spindle‘ signal in Fig 2. This signal can be used to detect a possible flank line angle error (fHß) at an early stage. Stegner says: “However, the procedure via envelope detection reaches its limits here, as the error is difficult to identify. As long as the signal remains within the envelope, no alarm gets triggered. So you need a more intelligent form of evaluation. Artificial intelligence attempts to emulate human decision-making structures. This involves making decisions based on a multitude of different information that is overlaid with personal experiences – upon which they act.“ 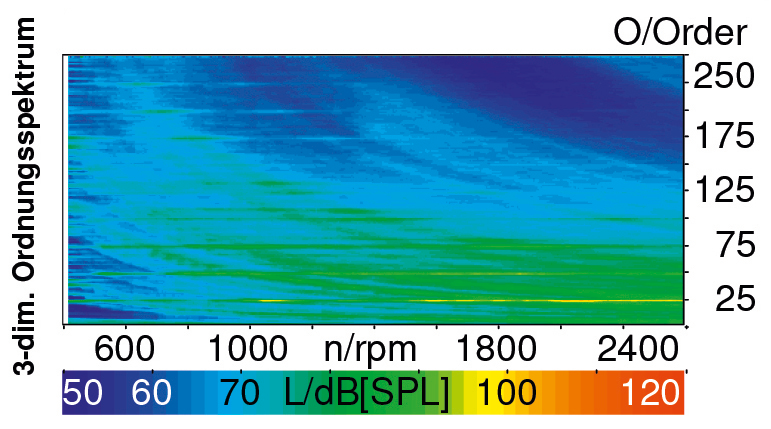 Process monitoring can be defined as component-specific monitoring and evaluation of the grinding process. As described, it is not a trivial matter to generate an action instruction from the sensor signals – but it is possible. Various characteristic values can be formed from time signals. In the simplest case, these can be the maximum or RMS (Root Mean Square) values of the signals. The characteristic values are then combined with the known project data via algorithms and processed into indices, for example, a noise or screw breakout index.

Achim Stegner explains the transmission noises: “An order analysis similar to the order spectrum on an end-of-line test rig can be created for noise-critical components via an FFT (Fast Fourier Transformation). This makes it easier to classify the recorded signals and relate them to results on the transmission test bench (see Fig. 3). Measurement data that is not processed is of no use.”

The benefits of process monitoring can therefore be seen in 100% testing of all components, identification of anomalies during grinding, detection of component-specific faults, targeted reporting of irregularities, adaptive in-process intervention and part tracing.

Process monitoring is not yet an App that you can simply download and use. It is a customer-specific development that defines and monitors indices concerning the respective component. But even this first step is far more than was considered feasible until only recently.

Achim Stegner on this: “Several pilot customers are already using this functionality. We are already able to detect different errors and intervene in the process. In addition, we are already working on having the grinding machine teach itself characteristic values for new components. However, this requires broad empirical knowledge from error patterns, the geometric quality of the components and corresponding feedback from the transmission test bench.” Friedrich Wölfel adds:

This approach to process-integrated quality assurance is already available for Kapp Niles machines from the Engineering Technology Group (ETG) and are continuously being given further functional scopes and utilisation options through the experience gained from series production.