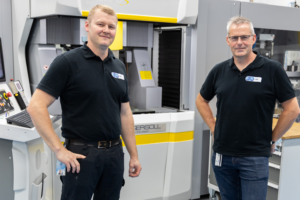 In 2018, the mould-making department at Procter & Gamble optimised its portfolio to meet the requirements of multi-cavity moulds that require small, high accuracy geometries. In addition, the company wanted to consistently continue the changeover from copper to graphite electrodes, which began in 2014. With the investment in OPS-INGERSOLL’s EAGLE G5 Precision die-sinking EDM machine, which is available in the UK from the Engineering Technology Group (ETG). Now, the company has numerous options for making the manufacturing processes more efficient and economical whilst having the ability to tackle new challenges.

Prototyping and toolmaking activities at Procter & Gamble, are focused on dry and wet shavers as well as manual and electronic toothbrushes. To meet the high interchangeability and accuracy demands, the Kronberg plant in Germany was looking for a new die-sinking EDM machine in 2018. After some research, the company invested in the OPS-INGERSOLL EAGLE G5 Precision that is available from Wellesbourne based ETG. Jürgen Mohr, Group Head of Innovative Prototype and Molding Technologies (iPMT), sees this decision as an investment in the future: “In the course of merging the areas of prototyping and mould making, we wanted to uplift our portfolio. After a short benchmarking exercise, we realised that there was no machine on the market that was really comparable. On the other hand, we found that the quality characteristics of the G5 Precision have enabled us to meet our requirements for high precision in multi-cavity moulds and high-quality surfaces.”

Components that are extremely demanding and in terms of sizes, such as the cleaning elements of a toothbrush are sometimes as small as a grain of plastic granulate. The applications indicate how necessary the investment in this high-tech machine had been. These include 3-component injection moulded parts in 128-cavity moulds with tolerances of 5µm in many cases. With its high-quality equipment, innovative automation solutions and new strategies, prototyping and mould construction at P&G have been regarded as exemplary in the industry for decades. This is another reason why the investment in automation, including the EAGLE G5 Precision, appears to be ground-breaking. It has also changed its manufacturing strategies. While these components used to be milled at a high cost due to the small milling cutter diameters, the G5 Precision leads the path back to EDM.

Due to the process reliability and the fact that it is no longer necessary to intervene in the process to optimise the erosion technology, it is now possible to manufacture parts with an accuracy of less than +/- one-hundredth of a millimetre in a fully automated process. There are enough examples in Kronberg that speak for the use of EDM. These are, for example, mould cores with a clamping length of 250mm that tend to vibrate during milling. Where these used to be milled and partially eroded, they are now finished in a single EDM operation on the G5 Precision.

After investing in the G5 Precision, however, those responsible were faced with the question of whether to integrate the G5 Precision into the existing automation line or to use it as an automated stand-alone machine. Since the company operates in the end-to-end arena, from prototype and pre-production through to series moulds, the decision was made in favour of the stand-alone solution. This allowed for more flexibility with the MultiChange handling system offered by OPS-INGERSOLL. 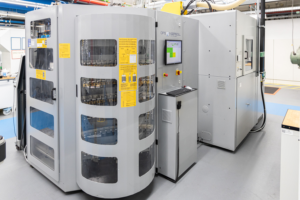 In this context, the Job Management System that runs to the line-automation system also appears to be particularly interesting for stand-alone automation. In a pilot project, OPS-INGERSOLL and P&G have expanded the system to utilise EDM within the Job Management System. Matthias Schmidt, Sales Manager at OPS-INGERSOLL, comments: “This job manager connection is unique. Since the job management system provided by the manufacturer of the milling machines is designed for milling, it has a relatively simple structure and does not offer any specific functions that are required for erosion. Now, it can call up where parts are currently located at any time, even if they are in a robot that is not part of their system in terms of software.”

In addition to the job management, maximum precision and high-quality surfaces, the whole system creates more added value. P&G has now reached the point where it can offer solutions that were not previously feasible. Among other subjects, the achievable surfaces are new territory for those involved. OPS-INGERSOLL promises quality of less than VDI10 with the corresponding graphite grade. In Kronberg, VDI10 is now reliably achieved in an automatic process. Even finer surfaces to VDI1 can be obtained with copper electrodes. The interchangeable frame of a shaver provides proof of concept.

This component was previously milled, eroded, polished and then decorated with a functional surface. Since this is a premium product, it was also intended to be provided with an electroplated surface. With the G5 Precision, however, it has been possible to achieve surface finishes of less than VDI10 and to eliminate reworking. This is an enormously helpful advantage when compared with external suppliers and the newly defined economic efficiency. The economic saving is achieved because reworking or additional finishing could be eliminated in some areas. Electrode wear has been noticeably reduced credit to the new multi-cavity technology provided by the technology programming system ‘PowerSpark Editor‘. Additionally, cycle times are again significantly shorter in some cases due to the new Eagle PowerSpark generator. Furthermore, according to Jürgen Mohr, the workload can be controlled much easier. 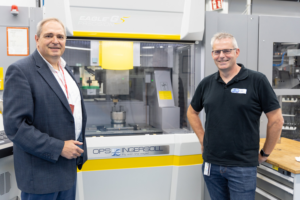 Braun & Oral-B electrical appliances have gained a worldwide reputation for their distinctive design. The GIC (German Innovation Center) and Development Centre for Devices is located at the Kronberg Taunus campus. The iPMT (innovative Prototyping & Molding Technologies) team with approximately 70 employees, realises the ideas and concepts from research & development. This area combines specialists from technologies and core competencies such as Additive Manufacturing, Modelling & Simulation, Process Development, Mould Development & Design, Mould Engineering and Prototyping & Manufacturing. These teams stand together as E2E development partners, from the prototype to the series tool. For the internally produced prototypes and components, a fully automated production line is available in the manufacturing area. Here, the prototypes, test moulds and moulding tool components for injection moulds as well as electrodes are produced and further processed.

Jürgen Mohr adds: “We’ve been working with the G5 Precision for quite some time, but I don’t think we’ve reached the top of the development curve yet. We need to keep confirming results, getting faster and more economical. And we need to find new applications.”

Without motivated employees, such results are not possible. For example, Viktor Hert, CNC and machine operator at iPMT, grows with the processes. A component that was originally planned to be engraved using a laser, was produced by him on the G5 Precision.