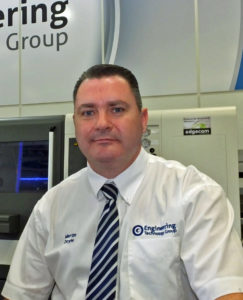 The Engineering Technology Group (ETG) has released an overview of its sales performance in 2016 while providing details of what it describes as ‘Phase Two’ of a reorganisation following an appraisal of the business after the management buy-out (MBO) 18 months ago.
“It has been a challenging year dominated by Brexit related uncertainty but one that we have ultimately come out of very well,” explains Group Managing Director Martin Doyle.
“Like many we experienced a lull in early and mid-summer.  I think buyers were simply waiting to see what happened after the referendum but soon after, when things started to return to something like normality, we saw an upturn as confidence returned.  Obviously as a nett importer (of machines tools) we have had to wear the effects of the low sterling value but confidence has returned to the market place, we have recovered well and the order book into the first quarter of 2017 and beyond is optimistic,” he advises.
ETG has also announced the completion of the second phase of a re-structure of the business by consolidating the Capital Equipment Division and the Operations Division under one roof as it continues to focus on efficiencies and customer care.
From January 2017, both will now be located on the Wellesbourne site in Warwickshire with the previous Southam headquarters building being vacated.  The Permanent Trade Show will be moved in part to Wellesbourne but integral to creating wider awareness of ETG and its products, Martin Doyle has also announced first details of a network of permanent machine displays located around the UK.
“The needs of manufacturers in geographic areas are quite different and we will be reflecting this in the type of demonstrations we will be creating,” he explains.
“We plan to be located on the South Coast and in the South West, Midlands, North West and North East.  Engineering differs in these regions – aerospace, automotive, oil and gas – and our choice of demonstration machines will reflect this.  Not forgetting of course the all-important general sub contract sector that is still a major part of what we offer. 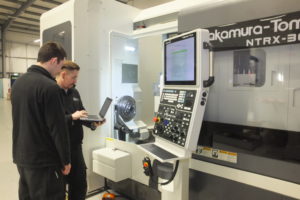 Martin Doyle has announced that ETG is already in the process of signing an exclusive deal with the largest apprenticeship provider in the UK.  It is also establishing relationships with likeminded associates within the industry to create up to half a dozen permanent regional demonstration facilities which will also act as a focus for customer training hubs and technical apprentice schools.
“A key part of what we offer at ETG relates to maintaining on-going relationships with customers,” adds Martin.  “Training support is all important and we will be offering this via our regional hubs, embracing controls and machine operation and CAD/CAM expertise, replicating real time and educational scenarios.
“We approach 2017 with optimism and some very exciting plans,” he concludes. “We are an optimistic company and look forward to converting our plans into reality in the coming 12 months,” he concludes.