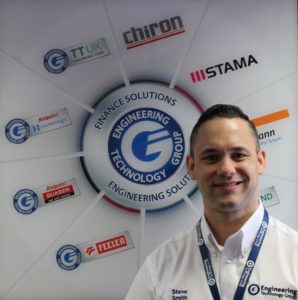 Steve Smith (37) has been appointed to the role of Pre-sales Engineer at the Southam based Engineering Technology Group.

Steve, a time served toolmaker by trade, will have responsibilities across the portfolio of ETG represented brands which include Chiron, Nakamura-Tome, Bridgeport, Hardinge, Quaser, Handtmann and Stama.

Steve has previously worked as a manufacturing engineer with Smiths Aerospace in Wolverhampton before moving into the tooling sector, working with both Seco Tools and Nikken.

In his new role with ETG he will be adding further technical strength to the organisation’s focus on applications, project management and turnkey engineering which is increasingly being undertaken in the UK following the establishment of ETG’s Operations Division based in Wellesbourne.

In his spare time Steve enjoys a range of pursuits including cycling but also intriguingly adds ‘mud running’!