At the hub of volume production 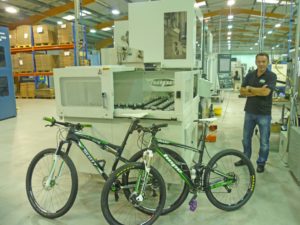 Hope is a great British manufacturing success story, selling its aftermarket components for performance bikes in 40 countries around the world. It exports 50% of its production and everything is made, processed and assembled in-house at its headquarters in Barnoldswick, Lancashire.

The company now has almost 120 staff operating the factory 24-7, running over 60 CNC machines, anodising the individual components and hand-assembling the finished parts.

Hope installed its first Nakamura-Tome twin-spindle, twin-turret lathe over 10 years ago, and has just installed its latest two machines – a WY-100 machine with automatic gantry loader for volume production and a compact single-spindle AS200 for product development. All were supplied by the Southam, Warwickshire based Engineering Technology Group (ETG).

Hope’s original product was a disk brake for bikes, initially cable-operated, but later hydraulic. It then developed a hub to carry the disk and has steadily developed its range from there.

As Works Manager Lindley Pate explains: “We now do a vast range of retrofits to upgrade your bike. You can start with a good frame and build your own Hope bike.”

Hope has also purchased a Quaser machining centre from ETG to produce various in house tooling components and moulds. The AS200 Nakamura is also being used to develop new products and both will soon be sited in a new development facility.

Hope’s first Nakamura was a WT150 twin-turret, twin-spindle machine, which it retrofitted with a Fanuc robot to load and unload the machine to allow it to run unmanned and achieve the required production output.

“That was the first real production machine we had,” says Lindley Pate. “We were a growing company and we didn’t have a lot of staff. We knew that the process was robust so we knew we could just turn off the lights and leave it running.”

That machine is still in production, as is a smaller WT100 machine purchased a few years later.

The new WY-100 is a twin-spindle, twin-turret machine with twin Y-axes on the top and bottom turrets. It can take up to 48 fixed tools or up to 24 driven tools, with 7.1kW of milling power.

The machine is fitted with an automatic gantry loading and unloading system which is capable of working with four different forgings to produce a range of different hubs.

“We bought this as our main production machine for hubs,” says Lindley. “And specified so we could machine all four forgings on the same machine – with the large Y-axis travel you have a lot more options for milling. What is most important for us though is the twin-turret configuration.

“The first component we put on the WY-100 used to take 31 minutes on a single-turret machine and involves a lot of milling and radial drilling. We have more than halved the production time to just under 15 minutes.”

The four different hub forgings range from 60 to 70mm in diameter and are used to produce a multitude of different final products – with different profiles, different numbers of spoke holes and so on. Changing from one to another simply entails changing the machine programme, the gantry programme and, in some cases, changing a couple of components in the loader.

“We need to change the pots that the forgings sit in and a couple of jaws. But we only need two gantry programmes to cover all four forgings and we use the same tool setup on the machine for all the hubs,” says Lindley.

At the moment, Hope uses four different machines to produce hubs. The strategy going forward will be to use the new machine to focus on the high-volume, high-demand components with others being put aside for smaller batches.

“I need to be making some of the lower volume parts while the new machine is doing high-volume machining of the big runners. You can’t really stop making those big sellers, so the WY-100 will focus on these and the others will fill in the gaps,” says Lindley.

The need for a gantry loading system was clear, he says.

“You obviously need an automatic loading system for volume production from forgings, and it is a matter of space too. The gantry is a built-in extension to the machine, so it is a lot more compact than a robot. And everything is enclosed, everything is safe and at a good working height.

“You can load it with 60 forgings and cycle times range from 7 minutes to 15 minutes for the most complicated component, so you have up to 15 hours running without needing to reload it.”

The main operations involved in machining the hubs are turning the OD, machining the spline that the disk sits on, machining the mounting face, drilling the spoke holes, boring the internal bearing diameters and cutting retaining clip grooves. 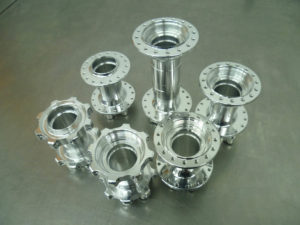 “The bearing diameters are held to less than 5 microns, so we need consistent accuracy on the boring,” says Lindley Pate.

He adds that many of the features are driven by aesthetics and weight reduction as well as by their function.

“Aesthetic considerations are crucial for a premium consumer product and it is recognized that the quality of our parts is superb. They don’t just work really well, they look good and they feel good. They look hand-finished even though they are made on a production machine.”